Tripura is located in the south-west corner of North Eastern Region. The state is connected with Guwahati, by National Highway (NH-8) – the distance between Guwahati and Agartala being about 587 Km. The distance of Agartala from Siliguri (which is considered the entry point to the North East) is about 1065 Km. 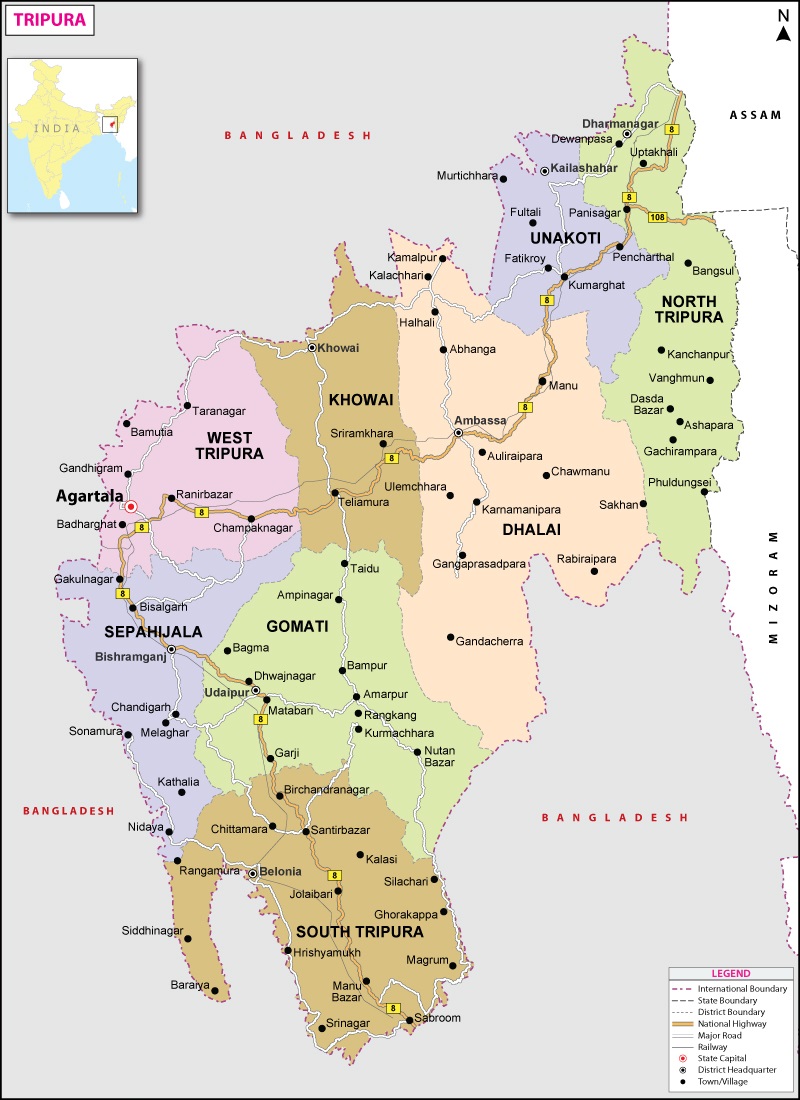 Railway Links:
• Railway line up to Udaipur via Agartala has already been successfully implemented and being extended to Sabroom. Also Agartala-Akhaura rail link is under construction.

Power:
• The State is presently power surplus (outside 6-hour peak period). Day-round surplus expected shortly. The power tariffs are much lower compared to other states, the highest rate being around Rs. 7.38 per unit

The History : Prior to its merger with the Indian Union in 1948, Tripura was a princely State that was not annexed by the British. The Chakla-Roshanabad area presently in Bangladesh apart from being a part of erstwhile Tripura king’s domain, was the plain area link to the rest of the undivided India. The major communication links, including roads, waterways and railways were available through this for the State population. This was also the economic link for the hilly and forested hinterland. The partition had thus imposed severe socio-economic and communication network disruption on the State.

The Land: Tripura is among the smaller State in the North Eastern Region, with a total area of about 10492 Sq. Km. only, out of which about 60% area is hilly and forested. The cultivated area is about 27% only. The State gets fairly good rainfall of about 210 cm, well spread over the year. Tripura’s agro-climatic conditions are suitable for a large variety of agro-horticultural crops.

The People: The State has a total population of about 36.74 lakhs (2011 census). The average density of population is also fairly high, at 350 per Sq.km, particularly considering the fact that 60% of the area is sparsely populated being forested and hilly. The literacy rate in the State is 96.82%, which is much higher than the national average. The State has a good social infrastructure in terms of educational and health institutions. The main languages spoken in the State are Bangla, Kokborok, Manipuri, Hindi and English.